The phrase “Let the wild rumpus start” was said by the character Max, the king of all wild things, in Maurice Sendak’s 1963 children’s picture book Where the Wild Things Are.

Jeremy Grantham, the 83 year-old bubble spotter extraordinaire, uses a variation of that phrase in his latest warning to investors entitled “Let the Wild Rumpus Begin”.

A rumpus – a loud commotion – has been rumbling under the surface of the stock market for the last several months and is getting louder because Grantham, Long-Term Investment Strategist & Co-Founder of GMO, believes we’re witnessing the popping of a super-bubble.

Grantham describes a super-bubble as three standard deviations above trend, which has only happened three times in the U.S. the last 100 years – 1929, 2000, and the 2007 housing bubble, and twice in Japan in 1989 with the dual real estate and stock market super-bubbles.

Grantham learned his lesson with bubbles in 1968-1969 when he rode an exhilarating micro-cap rally and made a “small fortune” only to “lose it even quicker”.

In the following instructive and ominous excerpts, Grantham explains:

All 2-sigma equity bubbles in developed countries have broken back to trend.

All five of these super-bubbles corrected all the way back to trend with much greater and longer pain than average.

Today in the U.S. we are in the fourth super-bubble of the last hundred years.

Previous equity super-bubbles had a series of distinct features that individually are rare and collectively are unique to these events.

In each case, these shared characteristics have already occurred in this cycle.

The checklist for a super-bubble running through its phases is now complete and the wild rumpus can begin at any time.

The penultimate feature of these super-bubbles was an acceleration in the rate of price advance to two or three times the average speed of the full bull market.

The final feature of the great super-bubbles has been a sustained narrowing of the market and unique underperformance of speculative stocks, many of which fall as the blue chip market rises.

A plausible reason for this effect would be that experienced professionals who know that the market is dangerously overpriced yet feel for commercial reasons they must keep dancing prefer at least to dance off the cliff with safer stocks.

This is why at the end of the great bubbles it seems as if the confidence termites attack the most speculative and vulnerable first and work their way up, sometimes quite slowly, to the blue chips.

The most important and hardest to define quality of a late-stage bubble is in the touchy-feely characteristic of crazy investor behaviour.

But in the last two and a half years there can surely be no doubt that we have seen crazy investor behaviour in spades – more even than in 2000 – especially in meme stocks and in EV-related stocks, in cryptocurrencies, and in NFTs.

What is new this time, and only comparable to Japan in the 1980s, is the extraordinary danger of adding several bubbles together, as we see today with three and a half major asset classes bubbling simultaneously for the first time in history.

When pessimism returns to markets, we face the largest potential markdown of perceived wealth in U.S. history.

The penultimate phase of major bubbles has been characterized by a “blow-off” – an accelerating rate of stock price growth to two or three times the average of the preceding bull market.

This pattern was shown as clearly as any of history’s other great super-bubbles in 2020 (see Exhibit 4). 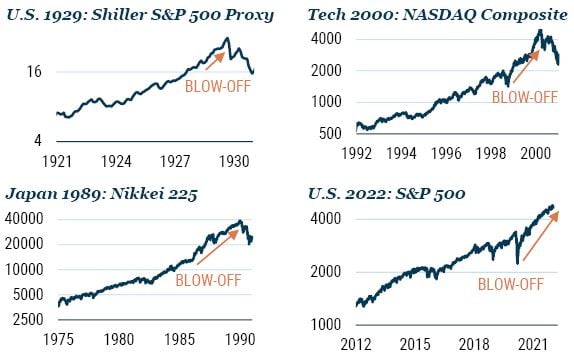 As for speculative madness, there were already many fantastic bubble anecdotes from 2020.

Since then, the anecdotes have been even better. We’ve had:

But – as fits the final “narrowing market” phase of a great bubble – most of these events are now well in the past, and the last six months have seen a growing numbness to the euphoria (see Exhibit 5).

GME, AMC, Dogecoin, and more than one-third of all NASDAQ stocks are now all down more than 50% from their highs.

Bitcoin is down over 40%, and my own unfortunate Quantumscape, which 13 months ago was worth more than GM (1929 had many extreme speculations but nothing on this scale), is down from its December 2020 peak by 83%. Ouch!

EXHIBIT 5: BIGGEST AND HIGHEST QUALITY STOCKS CARRIED THE MARKET IN 2021

The Death of the Vampire

In the meantime, we are in what I think of as the vampire phase of the bull market, where you throw everything you have at it:

You stab it with COVID, you shoot it with the end of QE and the promise of higher rates, and you poison it with unexpected inflation – which has always killed P/E ratios before, but quite uniquely, not this time yet – and still the creature flies.

Just as it staggered through the second half of 2007 as its mortgage and other financial wounds increased one by one.

Until, just as you’re beginning to think the thing is completely immortal, it finally, and perhaps a little anticlimactically, keels over and dies. The sooner the better for everyone.

What to Do as an Investor?

GMO has a detailed set of recommendations available that I agree with.

A summary might be to avoid U.S. equities and emphasize the value stocks of emerging markets and several cheaper developed countries, most notably Japan.

Speaking personally, I also like some cash for flexibility, some resources for inflation protection, as well as a little gold and silver.

Calls From Market Heavyweights For Epic Crash Are Piling Up