You’re familiar with the concept, popularized by Ed Yardeni, that this decade will rhyme with the roaring ’20s of a hundred years ago in terms of technological innovation and a booming stock market.

Jason Bodner of Brownstone Research takes it a step further by looking at some unassuming companies that use what he calls “stealth technology” to stay ahead of the competition.

Here are some excerpts from an article by Bodner in which he uncovers some ideas for investors to capitalize on this theme over the next several years.

I believe we’re about to witness fierce growth and wealth creation like we haven’t seen in 100 years.

The 1920s saw us emerge from the Spanish flu pandemic and economic hardship. The pent-up demand and economic repression caused by the pandemic paved the way for the glorious industrial expansion that propelled the twenties.

And now it’s about to happen again.

The Dow Jones rose 46% from 1921 until 1925. This was because the index was filled with the engines of growth. The Dow Jones was the Nasdaq of today.

When we compare the Dow Jones from January 1921 to December 1925 with the Nasdaq from October 2015 until now, they track eerily similarly: 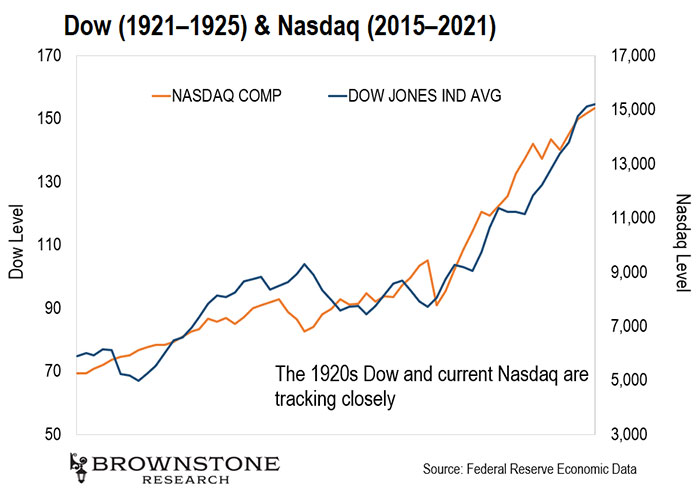 But if you think you’ve missed the boat, I’m here to tell you we’ve only just begun. 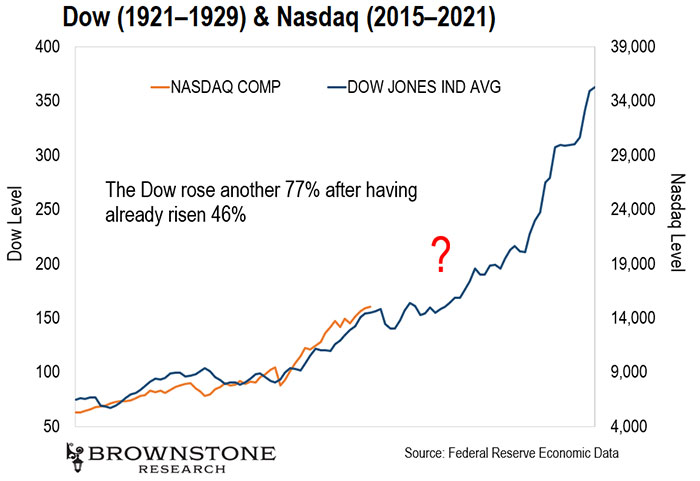 You could buy Invesco QQQ Trust Series 1 (QQQ), an ETF that tracks the Nasdaq, and be in a great position to ride the coming tsunami of growth.

But there’s a more laser-focused way to win. But before I explain, I need to introduce you to an essential concept.

My nearly 20 years working on the Street has helped give me insight into how markets move and how we can profit.

That’s why I’m so excited by the next Roaring ’20s that we’re moving into. There’s one key concept that we should keep in mind as we prepare for the coming boom.

I call it: Stealth Tech.

Stealth tech companies wear a disguise. On the outside, these companies look like boring, tired has-beens that have nothing to do with technology.

But if you peel back a layer or two, you suddenly realize you’re dealing with a cutting-edge tech company.

The next time you order a Domino’s pizza don’t fool yourself into thinking you’re dealing with a normal pizza company. Domino’s is a tech company that sells pizzas.

Former CEO Patrick Doyle said this for years. He used tech to help Domino’s smoke the competition. The company has exhibited phenomenal sales and earnings growth.

Domino’s credits its investment in technological innovation, which allows it to separate itself from the pack.

Phone orders are taken and managed through an artificial intelligence (AI) assistant called DOM. The chatbot handles incoming calls with customers who want to make or check on their orders.

The company has also invested heavily in driverless delivery vehicles alongside a company called Nuro.

And when it sinks in that pizza can be a tech business, you begin to realize that many businesses out there are stealth tech companies…

And health care companies can be stealth tech too. Intuitive Surgical (ISRG), for example, is building sophisticated robots that can perform minimally invasive surgery.

So what do pizzas, trucking, and robots have to do with the next Roaring ’20s?

Almost every company you can think of relies on software. Software is in our cars, our phones, our smartwatches, our appliances, and our computers. It runs our subways, airlines, global shipping, and so much more.

And the next years of growth will all be powered by bleeding-edge software. All of the innovations yet to be seen will run on software.

So while we could just buy QQQ and focus purely on tech. I believe we should also focus on tech’s rocket fuel.

The next Roaring ’20s is here. It’s only just begun. And stealth tech is one of the exciting ways that we’ll play this trend.

Related stories: Another Roaring ’20s May Still Be Ahead