Forces that could cause inflation to meaningfully accelerate and damage the environment for stocks are at least two years away.

In his latest report, chock full with the usual assortment of interesting charts, Peter Berezin examines inflation, innovation and the growth vs. value debate.

The Chief Global Strategist believes the setting remains right for investors to be overweight stocks, for now.

The Outlook for Inflation

Could inflation make a comeback once a vaccine is widely available?

The pandemic put significant downward pressure on prices in a number of areas, particularly air transport, accommodation, apparel, and gasoline.

While prices in some categories, such as used cars, meats and eggs, and certain toiletries did rise briskly, the net effect was still a substantial decline in overall inflation (Chart 4). 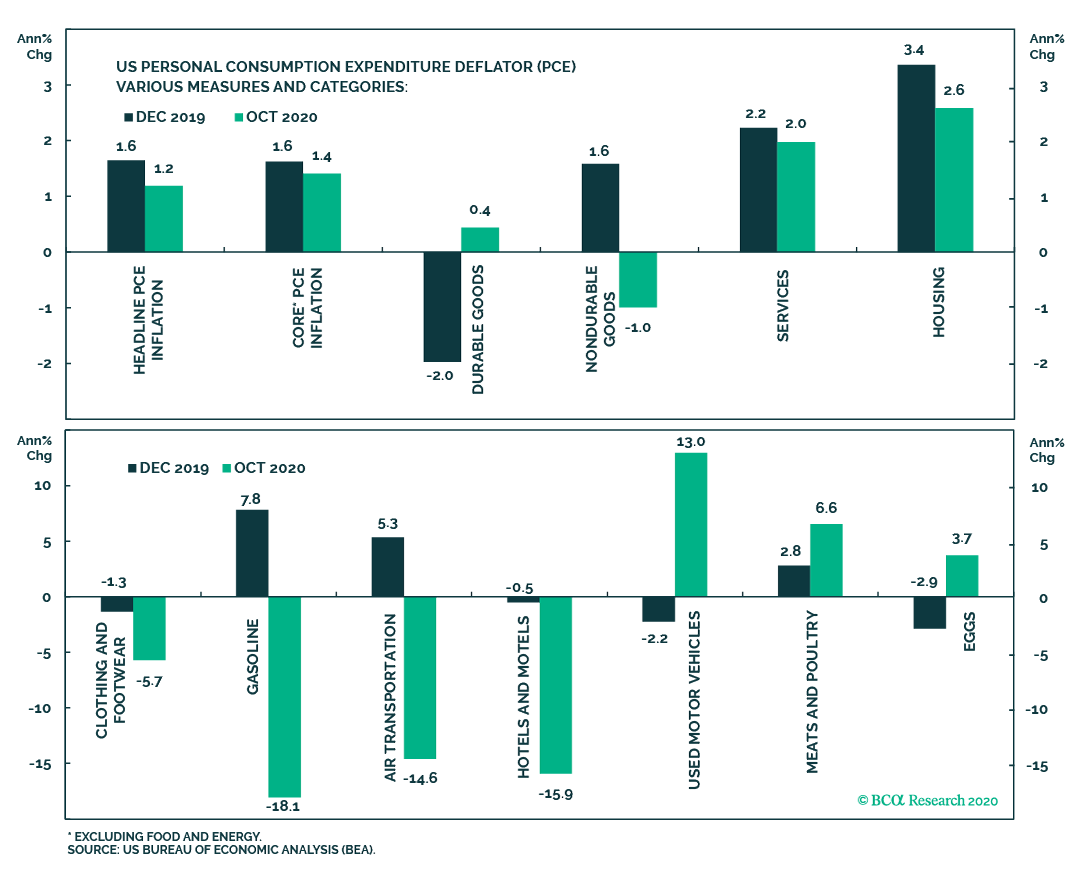 Ignoring the temporary oscillations in inflation due to base effects, a more sustained increase in inflation would require that labor market slack be fully absorbed.

In its October 2020 World Economic Outlook, the IMF projected that the unemployment rate in the major economies would fall back to its full employment level by around 2025 (Chart 6).

While a vaccine will expedite the healing of labour markets, it is probable that unemployment will remain too high to generate an overheated economy for the next three years.

Is inflation really dead, or is it just dormant?

What is true is that rising wage growth has failed to translate into higher price inflation in most economies since the early 1980s.

However, this may have simply been due to happenstance: Every time the global economy was starting to heat up to the point that a price-wage spiral could develop, something would happen to break it.

In 2019, the unemployment rate in the G7 hit a 46-year low. Perhaps inflation would have accelerated this year had it not been for the pandemic?

The Role of Innovation

Technological innovation has been routinely cited as a driver of falling inflation. In many ways, this is rather odd. Economic theory states that faster innovation should lead to higher real income.

It does not say whether the increase in real income should come via rising nominal income or falling inflation.

Indeed, to the extent that faster innovation leads to higher potential GDP growth, it could fuel inflation.

This is because stronger trend growth will tend to raise the neutral rate of interest, implying that monetary policy will become more stimulative for any given policy rate.

Moreover, the fixation on technology as a deflationary force is a bit strange considering that measured productivity growth has been exceptionally weak in most advanced economies over the past 15 years – weaker, in fact, than it was in the 1970s (Chart 14). 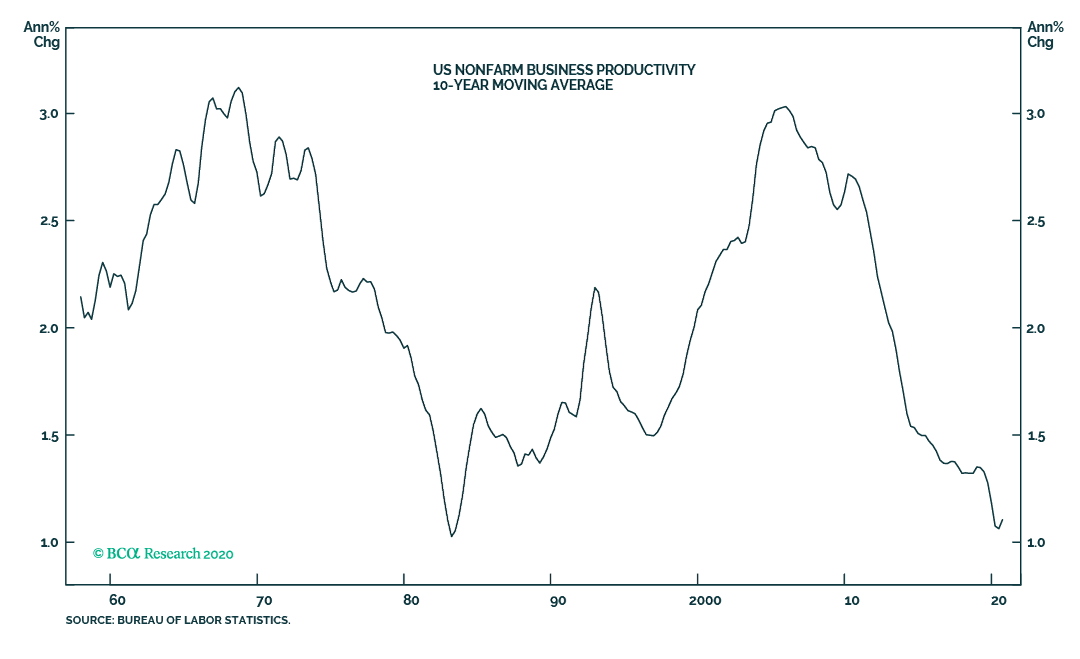 How, then, does one explain why tech stocks have fared so well? One often-heard answer is that productivity growth is mismeasured.

We examined this argument carefully in our report entitled Weak Productivity Growth: Don’t Blame The Statisticians, concluding that this does not appear to be the case.

What explains the bifurcation in performance within the tech sector?

Two reasons come to mind. First, tech companies are particularly susceptible to network effects: The more people who use a particular tech platform, the more attractive it is for others to use it.

Facebook is a classic example. Second, tech companies benefit significantly from scale economies. Once a piece of software has been written, creating additional copies costs almost nothing.

Even in the hardware realm, the marginal cost of producing an additional chip is tiny compared to the fixed cost of designing it.

All of this creates a winner take-all environment where success begets further success.

The role played by winner-take-all markets explains how a handful of companies were able to become mega-cap tech titans.

Chart 18 and Chart 19 show that increased monopoly power, as reflected in rising profit margins and higher relative P/E ratios, has played a greater role in driving tech share outperformance since the mid-1990s than faster revenue growth. 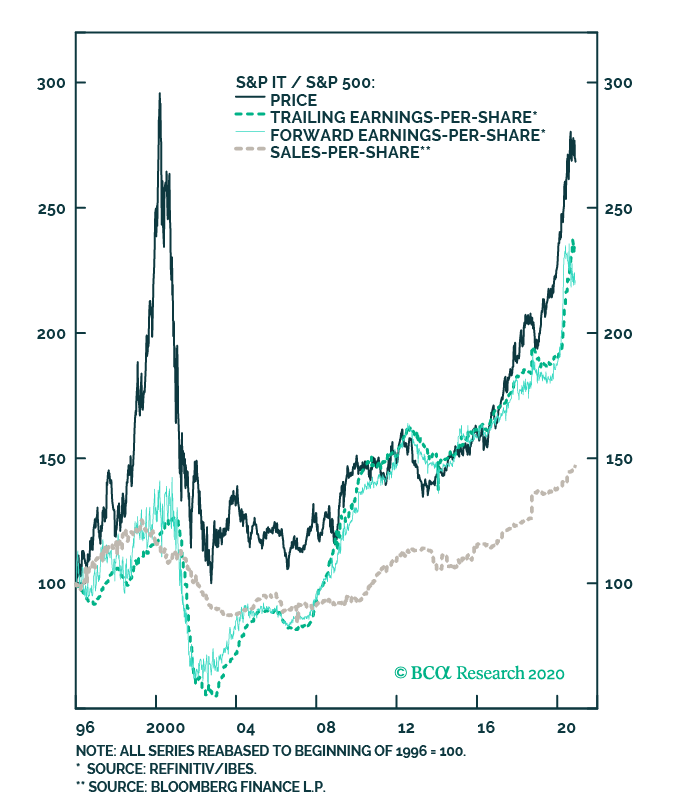 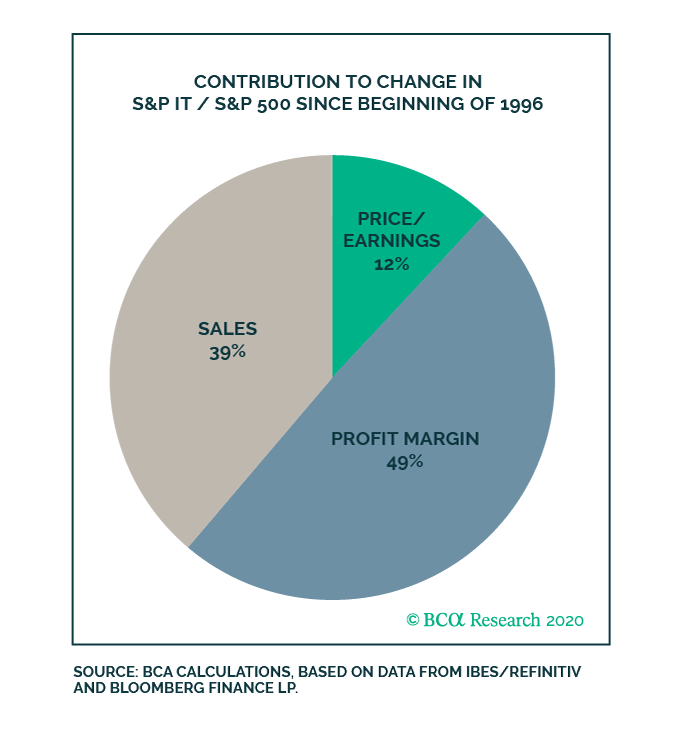 Equities have run up a lot since the start of November. Bullish sentiment has surged in the American Association of Individual Investors weekly bull-bear poll, while the put-to-call ratio has fallen to multi-year lows.

Given the likelihood that economic growth could surprise on the downside in the near term, equities are vulnerable to a short-term correction.

Nevertheless, rising odds of an effective vaccine and continued easy monetary policy keep us bullish on stocks over a 12-month horizon.

Equity investors should shift their allocation away from growth stocks towards value stocks and away from the US towards the rest of the world.

We like European banks in particular. They currently trade at 0.6-times tangible book value and 7.2-times 2019 earnings.

Earnings estimates for 2021 have been slashed but should rebound on the expectation of a vaccine-driven growth recovery later next year.

Light at the End of the Tunnel But Five Risks Remain