Could the inflation shock of the 1970s happen again? In a word, yes.

But to see how that’s possible it’s important to understand why prices actually surged during that decade.

Turns out many of the causes had their roots in U.S. government policy mistakes of the mid-1960s.

Peter Berezin, Chief Global Strategist at BCA Research, identifies nine myths and facts about inflation in the 1970s (we present the first three), hi-lights some of the eerie similarities to today, and tells the story with some excellent charts.

Deflation is bad for stocks, just as is high and accelerating inflation. Somewhere between deflation and inflation, however, lies reflation. Reflation is good for stocks.

We are currently in a reflationary Goldilocks zone, where inflation expectations have risen but not by enough to force the Fed’s hand.

There is a high probability we will stay in this Goldilocks zone for the remainder of the year.

Jay Powell told The Economic Club of New York last week that the Fed is unlikely to “even think about withdrawing policy support” anytime soon.

The Fed minutes released on Wednesday echoed this view. 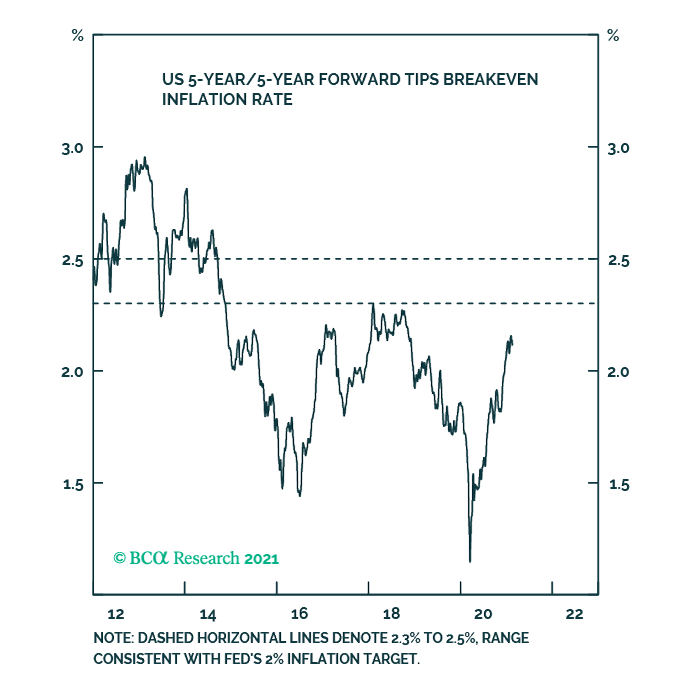 A period of ultra-easy monetary policy can sow the seeds for economic overheating, rising inflation, and ultimately, much higher interest rates. Since this is precisely what happened during the 1970s, it is prudent to ask whether something like that could happen again. We think that a 1970s-style inflationary episode is a greater risk than most investors realize.

As we discuss below, much of what investors believe about how inflation emerged during that period is either based on myths, or at best, half-truths.

Let’s examine each of these misconceptions in turn.

Myth #1: High inflation in the 1970s was primarily driven by supply disruptions, with oil shocks being the most prominent.

Fact: Oil shocks exacerbated the inflation problem in the 1970s, but it was an overheated economy that permitted inflation to rise in the first place.

Inflation took off in 1966, seven years before the first oil shock. By 1969, core consumer price index (CPI) inflation was running at close to 6% (Chart 7).

(Note that NAIRU stands for non-accelerating inflation rate of unemployment.)

Similar to today, fiscal policy was exceptionally accommodative in the mid-1960s. The escalation of the Vietnam War produced a surge in military expenditures.

Amy Finkelstein has estimated that Medicare, the larger of the two health care programs, led to a 37% increase in real hospital expenditures between 1965 and 1970.

Johnson’s “guns and butter” policies caused government spending to surge in the second half of the decade.

The budget deficit, which was broadly balanced during the first half of the 60s, swelled to 4% of GDP (Chart 8).

As fiscal policy was loosened, the economy began to overheat.

The unemployment rate fell to 3.8% in 1966, two percentage points below what economists later concluded had been its full-employment level. 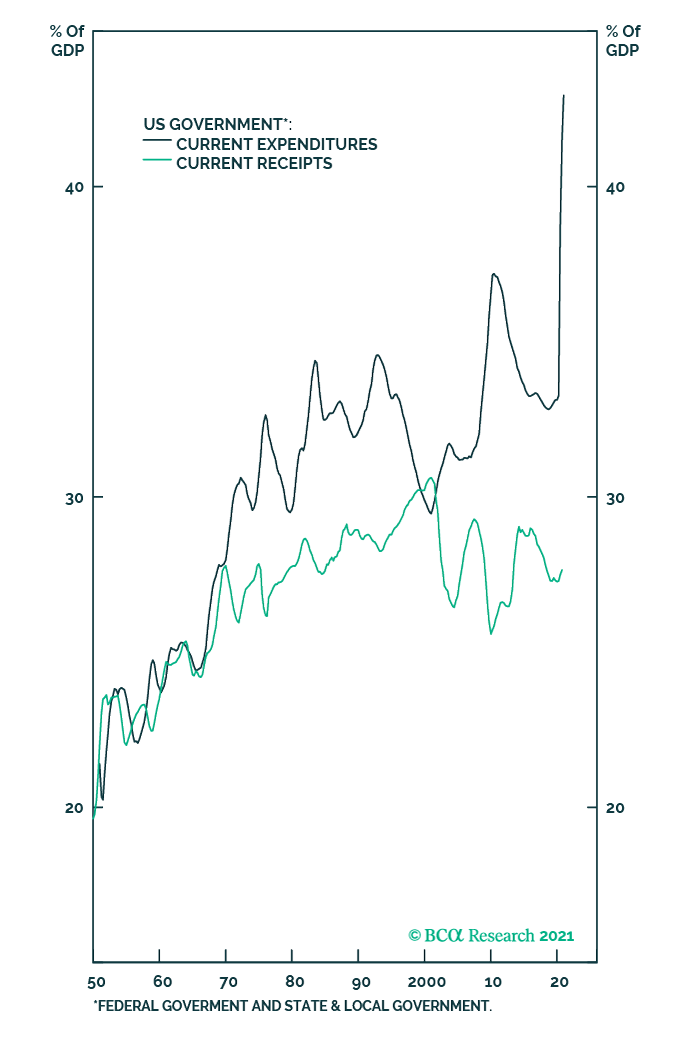 Myth #2: The Phillips curve is much flatter today.

Fact: The Phillips curve (an inverse relationship between rates of unemployment and rising wages) was also flat during the 1960s.

Core inflation was remarkably stable during the first half the 60s, averaging about 1.5%, even as the unemployment rate steadily declined.

Then, starting in 1966, core inflation more than doubled within the span of ten months. As Chart 9 illustrates, the sudden spike in inflation in 1966 was fairly broad-based.

A “kink” in the Phillips curve had been reached.

That the relationship between inflation and unemployment turned out to be non-linear is not surprising. As long as there is some slack in the labor market, employers are likely to resist raising wages.

Thus, a decline in unemployment from a high level to a merely moderate level is unlikely to lead to meaningful wage inflation.

It takes a truly overheated labor market – one that forces firms to engage in a tit-for-tat battle to entice workers – for the relationship between unemployment and inflation to reassert itself.

In the near term, there is little risk that the US economy will reach a kink in the Phillips curve.

The U.S. unemployment rate stood at 8.3% in January. This is well above the level that could trigger a price-wage spiral. 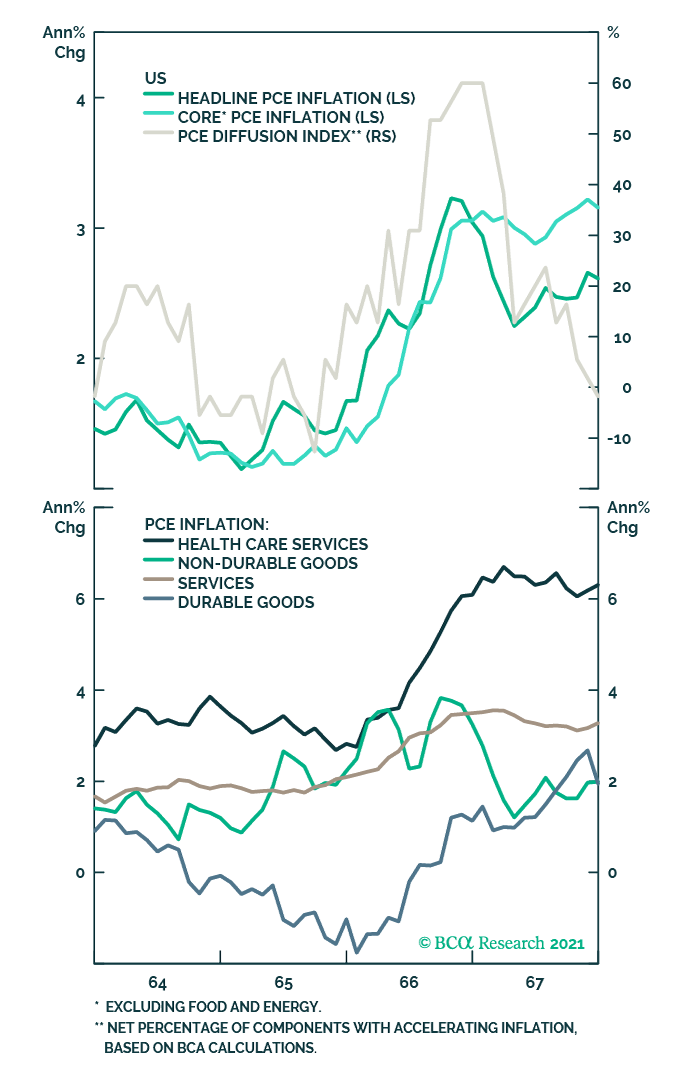 Yet, it would be naïve to think that such a spiral could not materialize in a few years.

As Chart 10 shows, over the past 40 years, every time the US labor market was on the cusp of overheating, something would invariably come along to push up unemployment.

Last year, it was the pandemic. In 2008, it was the Global Financial Crisis. In 2000, it was the dotcom bust. In the early 1990s, it was the collapse in commercial real estate prices following the Savings and Loan Crisis.

Admittedly, only the pandemic qualifies as a truly exogenous shock.

The preceding three recessions were fomented by growing economic imbalances, which were ultimately laid bare by a Fed hiking cycle.

One can debate the degree to which the US economy is suffering from non-pandemic related imbalances today, but one thing is certain: The Fed is not keen on raising rates anytime soon.

Thus, whatever imbalances exist today may not be exposed before the economy has had the chance to overheat. Fact: Inflation expectations certainly became unmoored in the 1970s. However, there is not much evidence that expectations were adrift prior to the sudden increase in inflation in 1966.

At the time, the US had not experienced a major episode of inflation since the Civil War.

While long-term bond yields did rise in the second half of the 60s, they generally lagged inflation, suggesting that investors were caught off-guard (Chart 11).

It should also be noted that the US and other major economies operated under the Bretton Woods system of fixed exchange rates during the 1960s.

Each US dollar was convertible into gold at the official rate of $35 per ounce. The existence of this quasi-gold standard helped anchor inflation expectations.

The system began to fall apart in the late 1960s as inflation rose.

When President Nixon suspended the dollar’s convertibility into gold in August 1971, the US CPI had already increased by nearly 30% from its 1965 level.

While the collapse of the Bretton Woods system in the early 1970s undoubtedly caused inflation expectations to become further unhinged, the breakdown of the system would not have occurred if inflation had not risen in the first place. 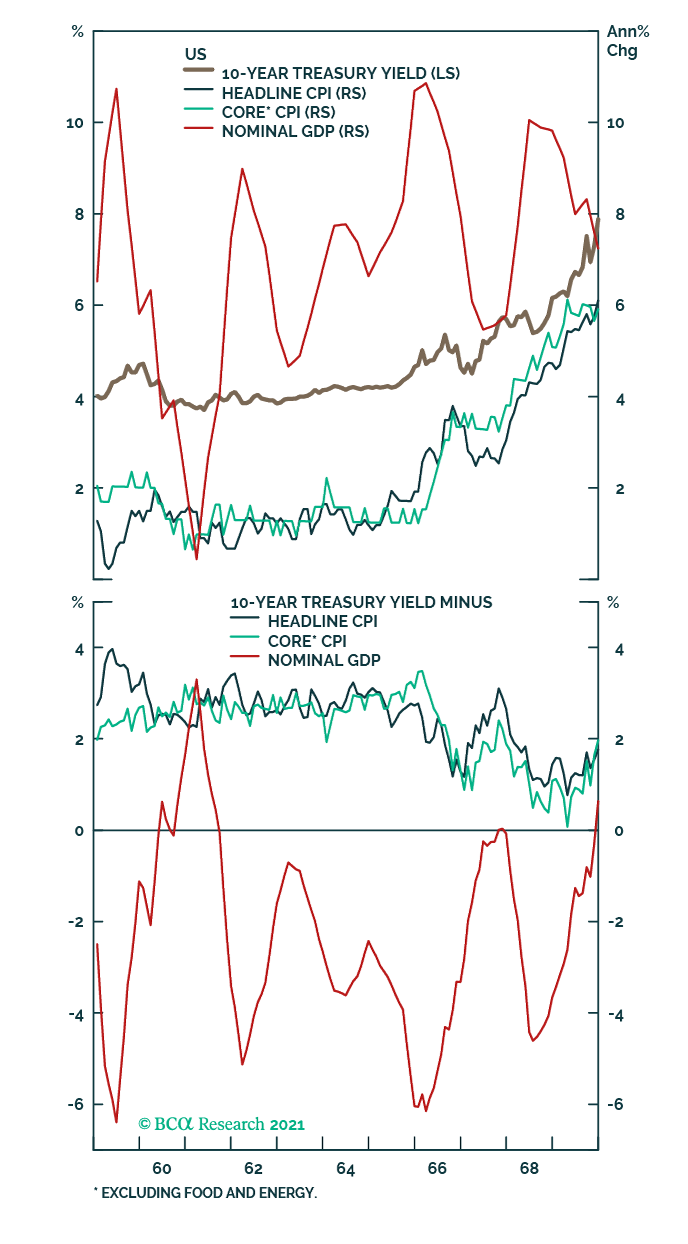 While no two periods are exactly the same, there are a number of striking similarities between the late 1960s and the present day.

What should investors do?

Our tactical MacroQuant model is flagging some near-term risks for stocks.

Nevertheless, as long as the economy is growing solidly and the Fed remains on the sidelines, it is too early for investors with a 12-month horizon to bail on equities. Instead, equity investors should favour sectors that could benefit from higher inflation.

Commodity producers are a natural choice. Banks could also gain from an uptick in inflation.

Chart 20 shows the remarkably strong correlation between the performance of US banks relative to the S&P 500 and the 10-year Treasury yield.

Banks are also very cheap and have started to see their earnings estimates rise faster not only relative to the broader market but even relative to tech stocks. 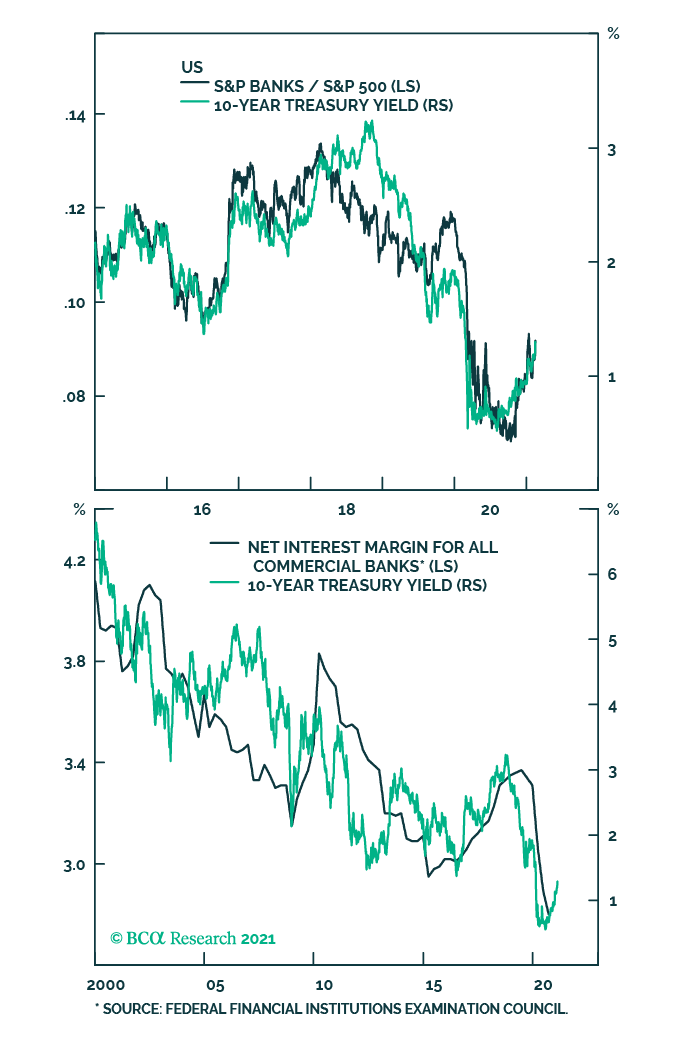 Looking further out, the secular bull market in stocks will end when inflation rises to a high enough level that even the Fed cannot ignore.

That day will arrive, but probably not for another two years.

Inflation is Back: How to Protect Yourself