Update: How to Prepare for the “Mother of All Melt-Ups” Mother of All Melt Ups, affectionately known by its acronym MAMU, was coined, to our knowledge, by Ed Yardeni, President & Chief Investment Strategist at Yardeni Research.

We posted an article on January 11 (link below) about Yardeni’s concern the stock market would get ahead of itself and implode, which would lead to a meltdown.

In these excerpts from a blog by Dan Ferris of Stansberry Research, he picks up on that theme, compares the similarities of today’s market with previous bubbles, and advises investors how to prepare for the inevitable end of the party. (And see below for the latest from Yardeni on MAMU)

Yale-educated economist Ed Yardeni coined the term MAMU a few weeks ago in a blog post called “Party Like There’s No Tomorrow.” As he wrote…

Now, as in 1999, there are mounting signs of irrational exuberance in the stock market. This time, there are also more signs of ultra-stimulative fiscal and monetary policies than there were back then. The combination could be fueling MAMU – the Mother of All Meltups.

Now, I want to be clear…

The MAMU isn’t here yet. For now, the dot-com bubble still holds that title.

But the recent mix of government policies and investor euphoria could be fueling a massive Melt Up in the near future.

The current moment is certainly loaded with examples of speculative froth. I hardly know where to begin.

Melvin reported a 53% loss for the month of January as a result.

While some counted the GameStop episode as a victory for the little guy, I never saw it that way. I knew they’d mostly get crushed, like they always do in speculative manias.

When a stock price goes straight up like a rocket ship, it’s practically guaranteed to turn right around and fall straight down – very soon.

GameStop hit $503 in pre-market trading on January 28. Its recent post-insanity low was right around $40. Since January 1, the stock rose nearly 30 times and then crashed more than 90% from its high. 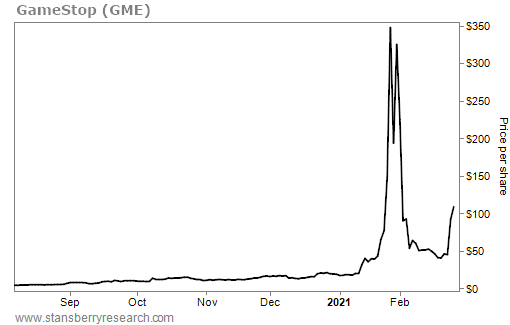 The more stock charts you see that look like ballistic missiles, the more 90% crashes you’ll see shortly afterward. Sooner or later, the big indexes will look the same way.

Another classic bubble-era development is the ‘star fund manager syndrome’…

During the “go-go” 1960s market mania, Gerald Tsai was that manager.

In 1957, he took charge of the Fidelity Capital Fund, the firm’s first speculative public growth fund offering. He took large positions in then-speculative names like Polaroid, Xerox, and Litton Industries.

The fund was extremely successful. Its high turnover and concentration in relatively few speculative names were unheard of at the time.

With Tsai at the helm, the fund returned 285% over its first seven years.

Tsai made a very respectable 39% in the first year, but seven years after the Manhattan Fund began, it was down 70% – the worst mutual fund in existence at the time.

And Tsai saw the writing on the wall as his fund began to falter. In August 1968, he sold the fund to CNA Financial for $30 million.

And he was off. Tsai went on to greater successes, eventually becoming a billionaire as well as the first Chinese-American CEO of a Dow Jones Industrial company: American Can Company.

Cathie Wood is the Gerald Tsai of today…

Wood has been profiled in the mainstream financial press over the last year or so given her fund’s eye-popping returns and the sectors that it invests in.

Wood founded ARK in 2014 to invest in “disruptive innovation.”

Just look at the names of the exchange-traded funds (ETFs) it offers, and you’ll understand why fear of missing out (FOMO)-addled investors are shoving money at it as fast as they can.

The list encompasses every tech-sounding investment fad of the last several years.

Now, look up every ETF listed above…

Every single one has that same ballistic trajectory.

Here’s a chart of all of them together (which frankly mutes the uniform ballistic-ness of a couple of the individual charts, but you get the picture). 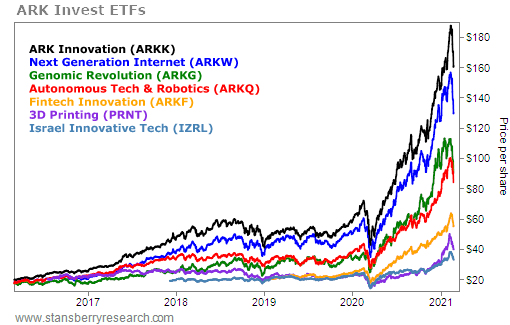 The 3D Printing Fund is the second-worst performer. The ARK Innovation Fund went up 150% in 2020. The ARK Genomic Revolution Fund rose 180%. Ballistic.

(Editor’s note: The ARK Innovation ETF is down 25% from its peak on February 12.)

We must not confuse a bull market with brains…

Wood has the wind at her back. And she should get a lot of credit for what she’s built.

But the fat lady never sings in the stock market. There’s always a “What next?” to answer. And what’s next is a horrendous crashing sound in the vicinity of ARK’s ETF offerings.

That’s due to the precise manner in which Wood and ARK are making hay while the sun shines.

To anyone who knows even a little market history, it’s as if Wood and her team went back to the great financial crisis, tried to figure out how the bankers almost broke the system while making themselves piles of money, chose today to ignore the “broke the system” part of the outcome, and are doing it all over again.

To put it in 1920s terms, investors chasing ARK’s returns and bidding up GameStop et al are all shoeshine boys – the kids on the street telling you how much money they’re making in stocks as the 1929 crash nears.

Today, they’re partying online like there is no tomorrow.

But there is a tomorrow – and always has been, at least so far – and you never know exactly what it will look like or what it will bring.

If you prepare your investments the right way, if you spend less than you make, and if you allocate your assets across a truly diversified portfolio of stocks and bonds, plenty of cash, and stores of value like gold, silver, and bitcoin, or put options on the big equity indexes.

In other words, if you understand that the party will end you might not end up in the headlines like Cathie Wood, and that’s OK.

Your portfolio will survive the Mother of All Melt Ups and be around for another day, and the one after that.

Here’s the latest from Ed Yardeni on the potential for MAMU:

Will April Showers Bring a Meltup? Panic Attack #69 might have ended yesterday now that the 10-year US Treasury bond yield seems to be settling down around 1.50%.

We still expect to see it around 2.00% by the end of the year. The recent rise in bond yields unnerved investors in growth stocks with relatively high valuation multiples.

The Nasdaq peaked at a record high on February 12. It fell 10.5% through Monday’s close. Yesterday, it rose 3.7%. What makes us think that the correction may be over?

The US government is about to shower the economy with $1,400 checks, which could fuel a springtime stock market melt-up.

Now that Biden’s America Rescue Plan is about to be enacted, we know that the economy will be showered with more “helicopter money”—the third round of pandemic relief checks.

The first round of checks was for $1,200 and rained down on the economy during April and May of 2020. The second round of $600 checks was sprinkled during January of this year.

The third deluge will fall later this month and mostly in April.

Some of the first two showers certainly boosted consumer spending and overall economic activity. But not all of it was spent; some of it was saved.

M2 (a measure of money supply) is up $3,978 billion year-over-year through January, the most on record.

Some of the cash that was saved from the checks undoubtedly contributed to the raging rally in stock prices since March 23, 2020.

The third round of checks is likely to contribute to another melt-up in stock prices during the spring, which starts on March 20.

In other words, April’s shower of checks could bring MAMU, the Mother of All Meltups, during the month.

We wouldn’t be surprised if it is led by the tech-heavy Nasdaq and Cathie Wood’s Ark ETFs (exchange-traded funds).

If that happens, we may have to cash in the chips just in time to “go away in May,” as the old saying goes.

The old adage doesn’t work every year. But this year, we know that the latest round of government checks could stimulate both economic activity and stock buying by retail investors during April.

The economic indicators to be released that month, for March, won’t reflect the impact of the checks on the economy just yet.

But those released during May, for April, are likely to be very strong and could spook the bond market.

That could trigger Panic Attack #70 in the stock market, especially if stock prices soar from now through the end of April.

Related stories: Market Party Could Lead to “Mother of All Melt-Ups” and Meltdown

Is There More Damage to Come for the Tesla-Bitcoin-ARK “Risk Cluster”?

Investors Beware: Stay on the Right Side of Change – Cathie Wood’s Innovation Manifesto