We’ve published excerpts of many of his previous reports, which are always thoroughly researched as he makes salient points about the economy and how investors should be positioned.

And, as always, Berezin’s research is peppered with a number of informative charts that help us visualize his key points.

What follows is a condensed version of Berezin’s latest report entitled Election Fireworks, in which he looks at the political state of play, the economy post-Trump and how big banks and value stocks should thrive.

Last week, we highlighted that BCA’s geopolitical quant model was predicting a much closer election than most pundits were expecting. This indeed turned out to be the case.

For a brief while on Tuesday night, betting markets were giving Donald Trump a greater than 75% chance of being re-elected.

Unfortunately for the president, the good news did not last long. As more mail-in ballots and ballots cast in large urban areas were counted, the needle began to swing towards Joe Biden.

At the time of writing, betting markets are giving Biden an 88% chance of becoming President.

Assuming that Republicans maintain their majority in the Senate, tax hikes will remain off the table. This is good for stocks. Joe Biden would also lower the temperature on trade tensions with China. This, too, is good for stocks.

Conversely, the odds of a major fiscal stimulus package have dropped.

In contrast, the Republicans in the Senate have rejected calls for a large stimulus bill. With Joe Biden as President, Republican senators would have even less incentive to give the Democrats what they want.

Nevertheless, there are three reasons to think that Republicans will agree on a new stimulus bill.

First, the economy needs it. While US growth should remain reasonably firm in the fourth quarter, this is only because households were able to build up some savings earlier this year which they can now draw on.

As Chart 2 shows, since April, labor earnings have only grown one-third as much as personal spending. Transfer income has also plunged, resulting in a renewed drop in savings.

Once households run out of accumulated savings, there is a risk that they will cut back on spending. 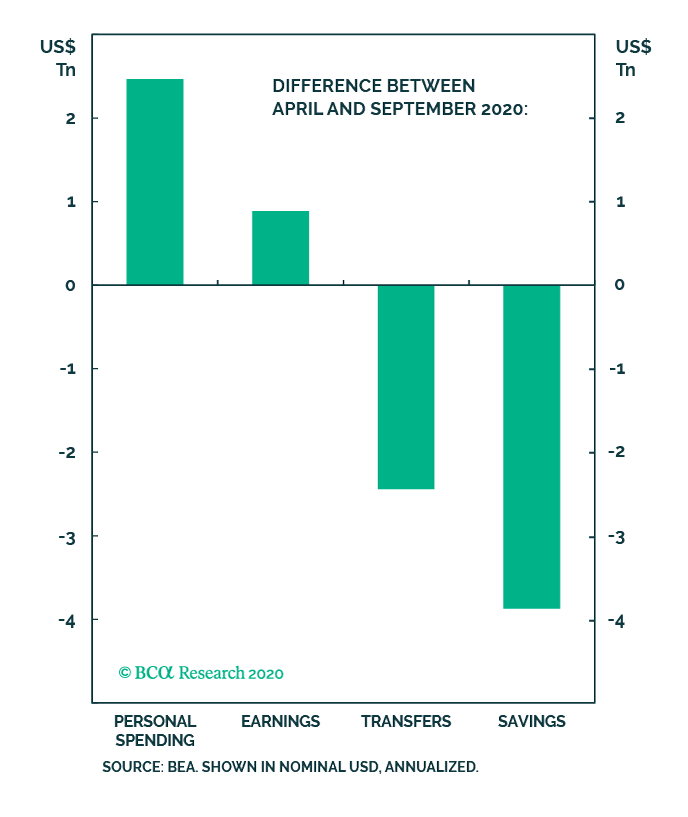 Such a package is basically what the Democrats are proposing. It is noteworthy that when this package is described in non-partisan terms, even the majority of Republicans are in favour of it.

All this suggests that Republicans will accede to a medium-sized stimulus bill in the neighbourhood of $700 billion-to-$1 trillion in order to avoid being perceived as stingy and obstructionist.

Senate Majority Leader Mitch McConnell noted on Wednesday that getting a deal done was “job one.”

While not our base case, a significantly larger bill is also possible. Most Republicans are not opposed to bigger budget deficits per se. It is increased social spending that they do not like.

Budget deficits in the service of tax cuts are perfectly acceptable to the majority of Republicans.

This raises the possibility that Republicans in the Senate and Democrats in the House could strike a grand bargain that raises spending while also promising additional tax relief.

If one needed any more proof that what is good for Wall Street is not necessarily good for Main Street, the last three trading days provided it: 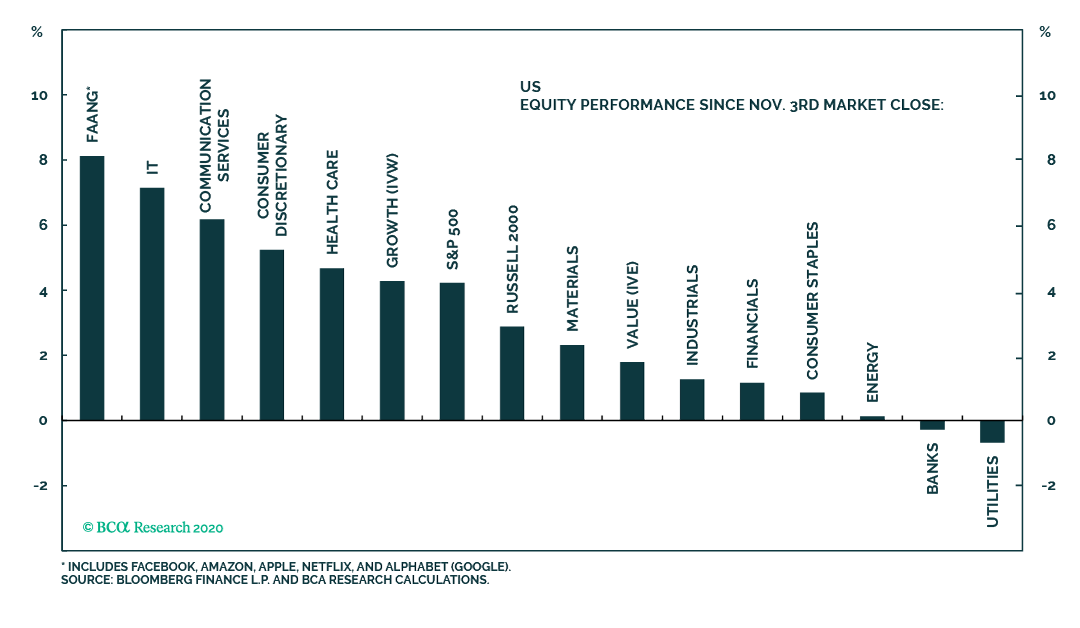 From a valuation perspective, relative to the broad market, US banks trade at one of the largest discounts on record on both a price-to-book and price-to-earnings basis (Chart 9). 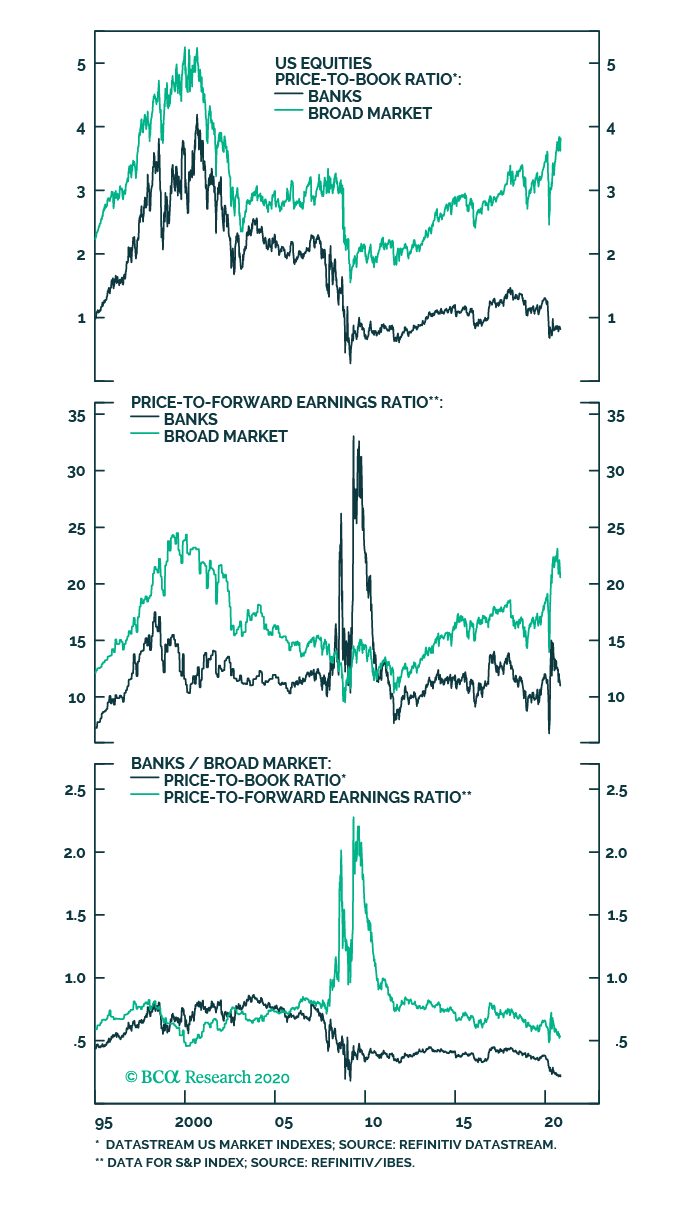 This largely reflects the expectation that bank earnings will grow more quickly than other sectors in 2021/22. 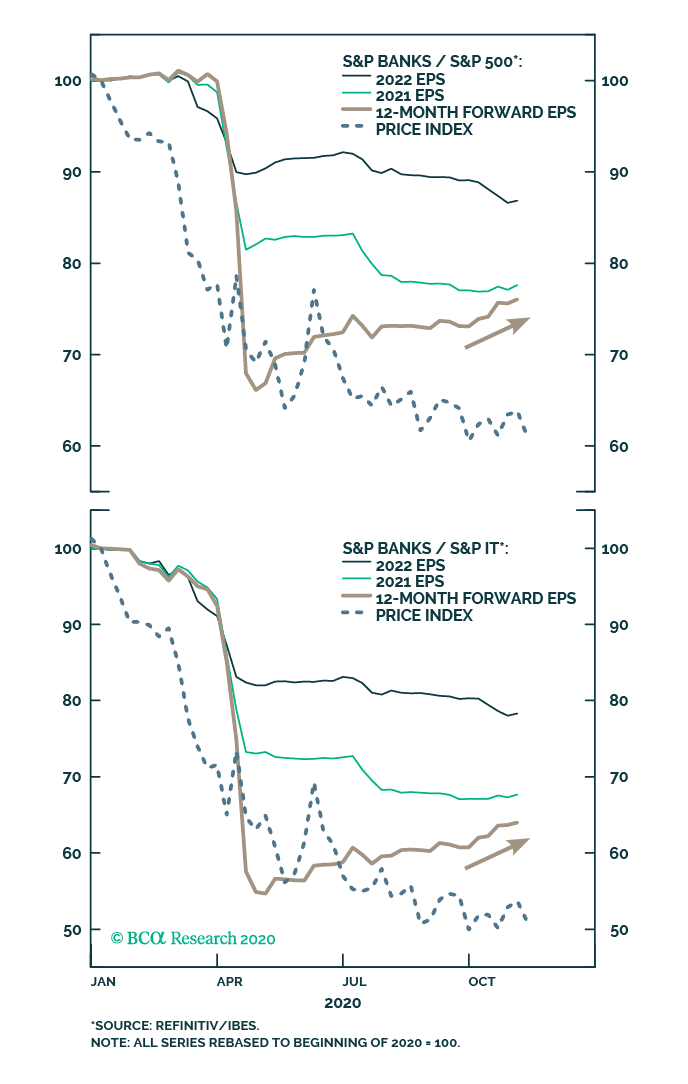 Banks in a number of markets outside the US face greater structural challenges than their US counterparts. Most notably, euro area bank earnings remain well below their pre-GFC highs (Chart 11).

That said, investors are not exactly expecting European bank profits to recover to their glory days anytime soon. Chart 12 shows that if euro area bank EPS were to simply go back to last year’s levels, banks would trade at 5.4-times earnings.

This implies a very low bar for success. 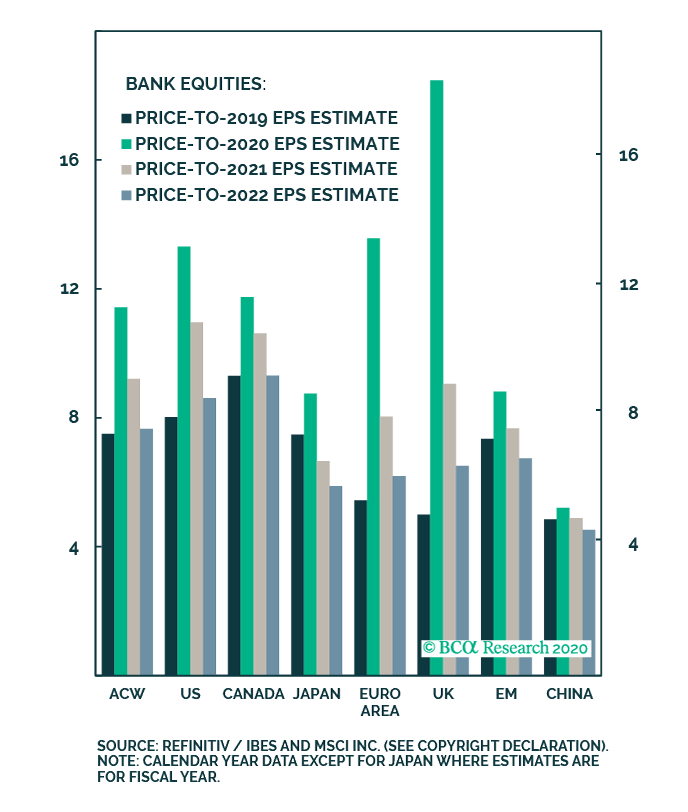 Stocks have run up a lot over the past few days on fairly weak breadth. A short-term pullback would not be surprising.

Nevertheless, investors should remain overweight global equities versus bonds over a 12-month horizon. The combination of ongoing fiscal and monetary support, together with a vaccine, will buoy global growth.

As Chart 13 shows, it’s rare for stocks to underperform bonds when the global economy is strengthening.

Value stocks typically do well when economic activity is picking up (Chart 14). That said, we are less sure about when the inflection point in the value/growth trade will arrive. 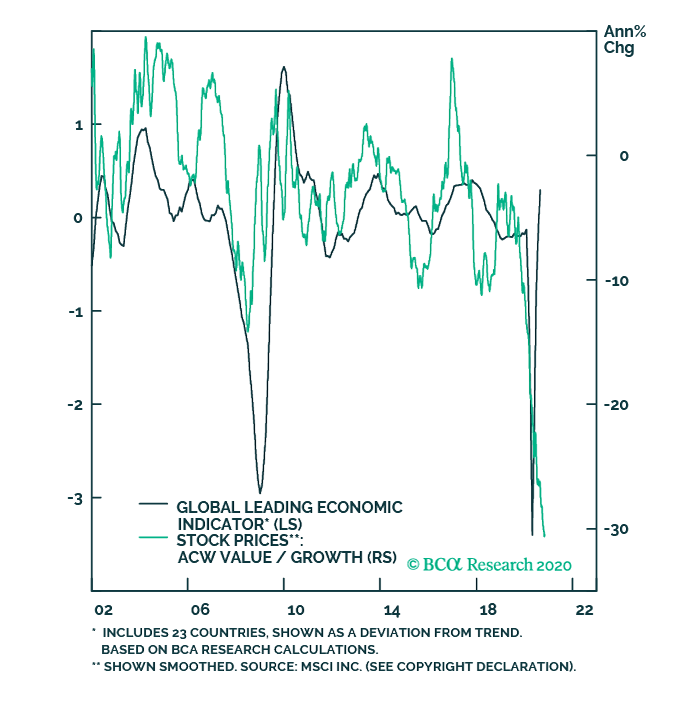 For now, the number of new infections has not shown signs of peaking in either the US or Europe.

Investors should continue monitoring the daily COVID data and be prepared to increase exposure to value stocks when clearer evidence emerges that the latest wave of the pandemic is cresting.

Related stories: How Much Economic Damage Will the Pandemic Cause?