Why Netflix’s Stock is in Purgatory No quibbles in this corner about the long-term stock performance of Netflix. The stock is up about 465% per cent in the last five years.

But is the big spending, online video streaming leader a buy now after a tepid earnings report.

And with increasing competition from the likes of fast-growing Disney+, are the days of heady growth for Netflix over?

Hedgeye analyst Andrew Freedman explains why, for now at least, Netflix shares are in purgatory and likely to fall. 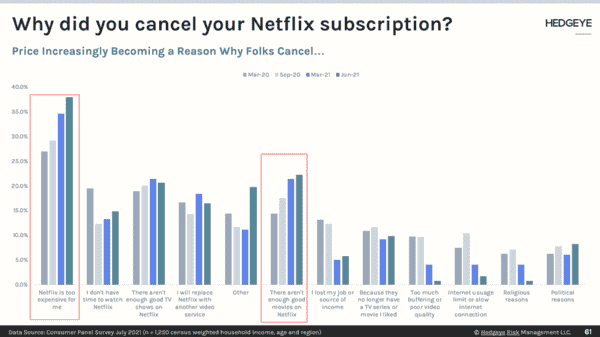 On the subscriber front, Netflix added 1.54 million (M) subscribers in 2Q21 (slightly ahead of management’s guidance of 1M, and just above consensus of 1.2M – note the consensus estimate was revised downward from 1.6M in days leading up to the print).

Most notable was the United States and Canada (UCAN), where Netflix lost 433k subscribers, largely offsetting the Q1 gain of 448k.

Say what you will about competition, but we believe it is having an impact on the margin.

From the survey chart above, you can see that “price” has become increasingly a reason why people cancel Netflix in the U.S.

In total, Asia-Pacific (APAC) represented 66% of subscriber additions this quarter, which we believe are coming in at a lower average revenue per user (ARPU) contribution due to mobile-only.

We were expecting 1.4M sub adds this quarter and 4.2M on the company guidance for the current quarter – so there’s downside risk on guidance relative to ~6M consensus Q3 estimate given where the data was trending quarter-to-date).

They guided to 3.5M net additions AND a further revenue growth deceleration to 16% in 3Q21 from 19% this quarter.

Meanwhile, free cash flow (FCF) went back to negative this quarter! (we have long argued you can have FCF or sub growth but not both).

We continue to believe that Netflix’s growth algorithm is challenged.

… and on the net add guidance of 3.5M for Q3, I thought it was weak relative to the 2.2M 3Q20 last year and with the content slate ramping back up with “Money Heist” being released late September.

Overall, it doesn’t inspire a ton of confidence that we are getting back to 2019 level of sub growth of 25M a year by 2022 (I’d like to see estimates come down closer to 20M).

From our seat, the quarter played out largely as expected.

We have been less bearish on the stock because of the prospect for a rate of change improvement in sub adds given the better content slate, but not ready to make the pivot to the long side since we thought estimates needed to come down.

And while estimates certainly will come down after last night, it is still to be determined whether we get a large enough second half 2H improvement to keep the total addressable market/Growth narrative intact.

If tentpole series like “Money Heist” and “The Witcher” (historically major drivers of new sign ups) don’t move the needle, then that will be a big problem and we are setting up for a great short opportunity later in the year (capitulation event).

However, for now, it appears the sell side is going to continue to defend the name (yay video games! #shinyobjects).

So… the stock likely remains in purgatory/range-bound.

If we somehow get to $450/share or lower then Netflix gets more interesting on the long side.

But as of this writing, we are keeping it on the short bench and will continue to track the data closely for a meaningful inflection.

I don’t see how the stock works on the long side until estimates find a bottom and we see evidence that sub trends are improving. 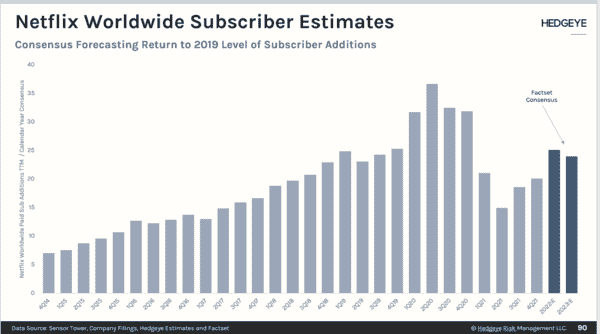 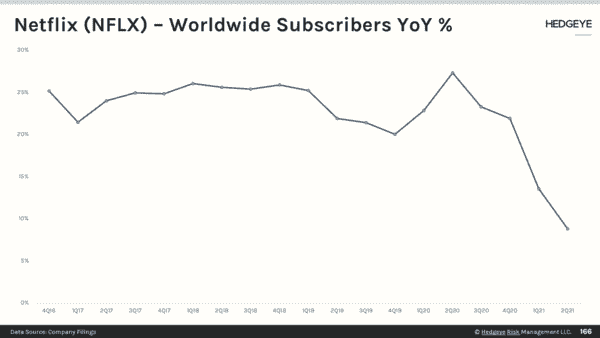 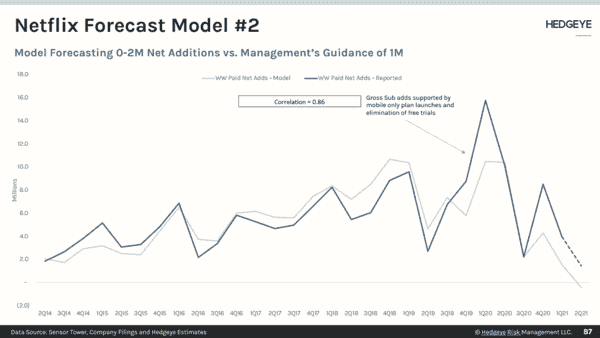