Why the “Awesome Eight” Will Roll Over Tired of reading and hearing about the extraordinary outperformance of the big technology stocks and their inordinately large share of the stock market?

Well, you may not have to deal with it much longer. That’s not to suggest that Apple, Amazon et al have peaked as businesses and investments and it’s all downhill from here.

Only that all good things must end and that investors with profits in these market leaders may want to consider looking at taking some money off the table and applying it to some out of favour sectors and stocks.

BCA Research makes a convincing case in a new report that it’s unlikely the outperformance of the Awesome Eight, as Chief Global Strategist Peter Berezin calls them, will continue.

Here are some excerpts from Berezin’s report:

Are The Awesome Eight At Risk Of Becoming The Awful Eight?

After plunging alongside the rest of the stock market in March, tech stocks have roared back. The tech-heavy Nasdaq 100 is up 31% since the start of the year.

Meanwhile, the median US stock has lost 14% this year (Chart 1).

Will tech outperformance continue? There are five reasons to think it will not:

Reason #1: The dismantling of pandemic lockdown measures could shift some spending from the online realm back to brick-and-mortar stores.

The pandemic has led to a major reallocation of spending from brick-and-mortar stores to online retailers. Sales at US online stores increased by 25% year-over-year in July versus -1% at physical stores (Chart 2).

According to Bank of America, after rising steadily from about 5% in 2009 to 16% in 2019, the US e-commerce penetration rate has jumped to 33%, representing more than ten years of growth in only a few months. 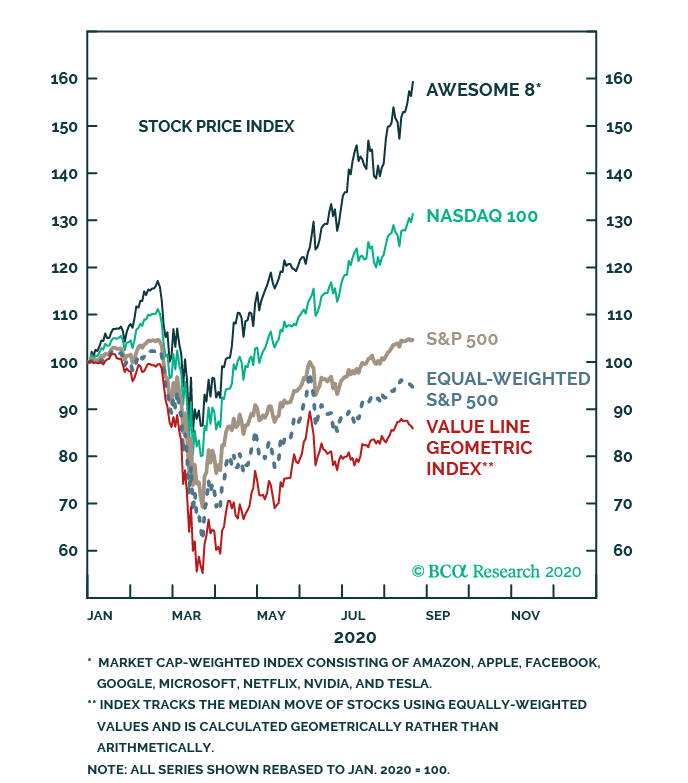 Will The Dismantling Of Lockdown Measures Bring Brick-And-Mortar Retailers Back To Life? There is little doubt that we are still in the midst of a secular transition towards e-commerce. However, it is likely that the dismantling of lockdown measures – hopefully facilitated by the release of a vaccine later this year – will bring back some spending to brick-and-mortar stores.

This could produce a temporary air pocket in sales for online sellers, a risk that does not seem to be fully discounted (Chart 3). 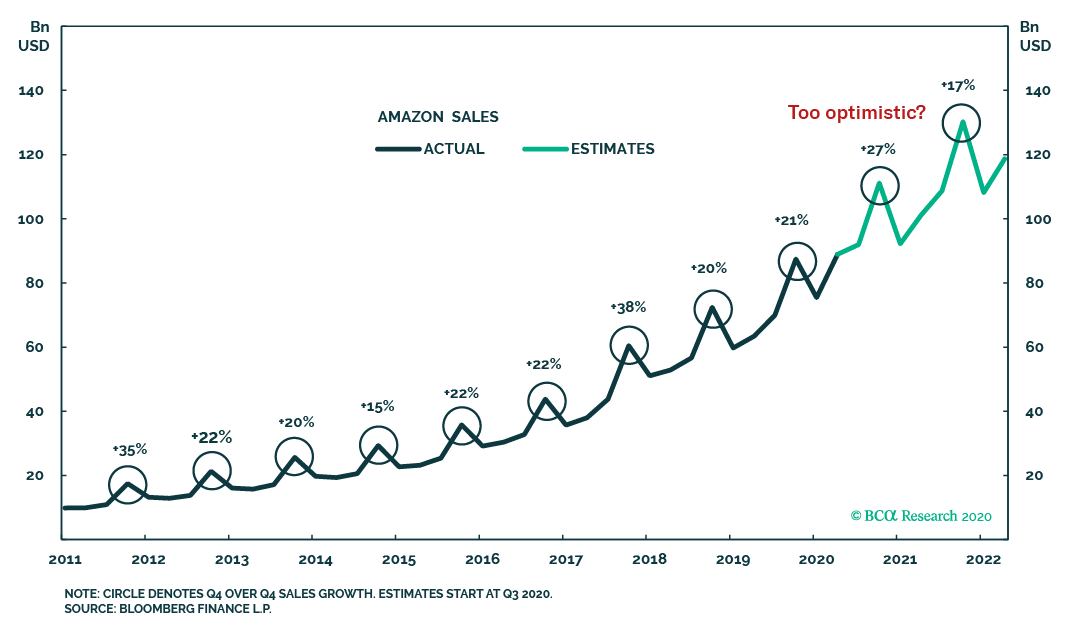 Meanwhile, other tech companies that have benefited from the pandemic could face headwinds. Netflix saw its global subscriber count jump 27% in the second quarter relative to a year earlier.

If someone did not bother to purchase a Netflix subscription in March or April, how likely is it that they will subscribe for the first time in September?

Reason #2: Interest rates are unlikely to fall much further, which will remove one of the tailwinds propelling tech outperformance.

Technology companies are used to cutting prices on older models as newer, more innovative versions come to market. In this sense, deflation is built into their business models.

Many tech companies also trade on long-term growth prospects, which means that changes in discount rates have a disproportionately greater impact on the present value of their cash flows than for slower growing companies.

All this means that tech stocks tend to outperform in environments where inflation and interest rates are falling. 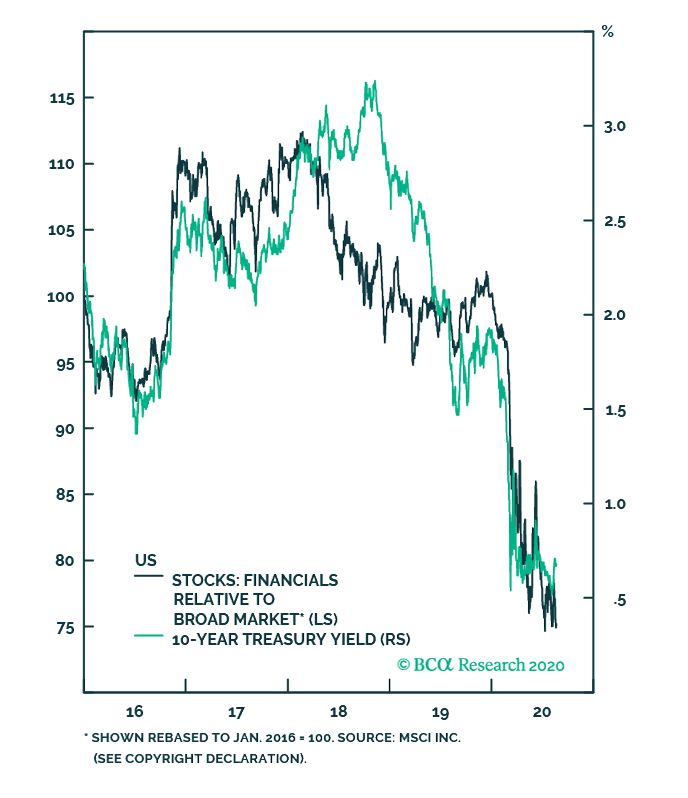 We do not expect inflation to surge over the next two years. Nevertheless, the deflationary impulse from the pandemic is likely to abate as spare capacity is absorbed and overall demand recovers.

Likewise, bond yields are likely to rise modestly over the next 12 months. Higher bond yields will benefit bank shares (Chart 5).

The Awesome Eight stocks are even more pricey, trading at 43-time and 34-times this year’s and next year’s earnings, respectively. 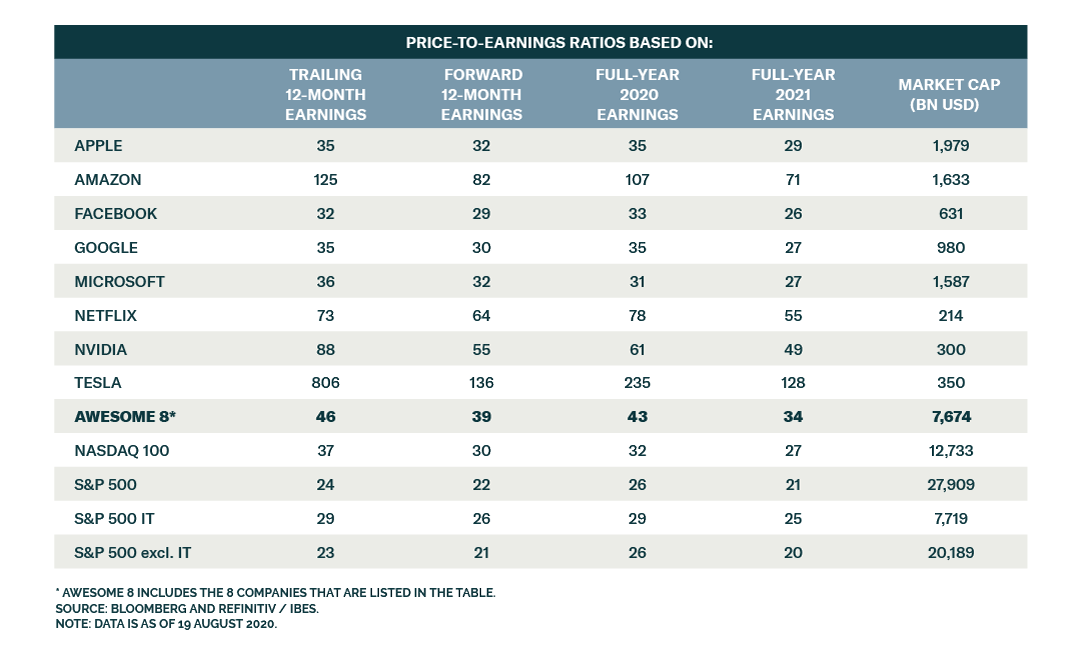 Outside the IT sector, the S&P 500 trades at 26-times 2020 earnings and 20-times 2021 earnings. It should be noted that these numbers overstate how expensive the non-tech part of the S&P 500 index really is because Amazon resides in the consumer discretionary sector while Facebook, Google, and Netflix sit in the communication sector.

In fact, only three of the Awesome Eight are in the S&P 500 IT sector (Tesla has yet to be admitted into the S&P 500, despite having a market cap that would now make it the 10th most valuable company in the index, right ahead of P&G).

While the PE ratio on tech stocks is still well below the nosebleed levels reached during the dot-com bubble, other valuation measures are approaching their prior peaks.

Tech stocks trade at 9.6-times book value, the highest level since early 2001, and more than double their peak valuation level in 2007 (Chart 6).

Reason #4: Many marquee tech companies have become so big that further gains in market share may be difficult to achieve.

The Nasdaq’s lofty valuation presumes that earnings will continue to rise at a rapid pace for many years to come. That has certainly been true for the past decade.

Indeed, most of the outperformance of tech stocks can be chalked up to their faster earnings growth.

Tech Stocks: Some Valuation Measures Are Quite Stretched.

Most of the Outperformance of Tech Stocks Can Be Attributed To Faster Earnings Growth.

But will such earnings growth continue? That is far from certain. Bottom-up estimates foresee earnings per share among Nasdaq 100 members rising by 20% in 2021. This is actually below the projected earnings growth of 27% for the S&P 500.

Admittedly, the faster projected earnings growth of non-tech companies in 2021 will constitute a reversal of this year’s pandemic-induced earnings collapse, from which tech was largely insulated.

Thus, there is a base effect at work. Nevertheless, if most investors focus mainly on annual growth rates, they could become enamoured with non-tech stocks, at least temporarily.

Looking further out, the rapid growth in tech earnings could decelerate as many of today’s marquee tech companies struggle to expand market share.

Close to three-quarters of US households already have an Amazon Prime account. Slightly over half have a Netflix account. Nearly 70% have a Facebook account. Google commands 92% of the internet search market. Together, sites owned by Google and Facebook generate about 60% of all online advertising revenue.

New opportunities for growth will undoubtedly arise, but there is no guarantee that today’s leaders will be able to take advantage of them.

History is littered with tech companies that failed to keep up with a changing world:

Historically, the US government has taken a laissez-faire approach towards the tech sector. As an avowedly pro-business party, the Republicans were happy to espouse deregulation and low corporate taxes, while lauding Silicon Valley’s dynamism and global dominance.

The Democrats also had a cozy relationship with the tech sector. As Chart 10 shows, political donations from tech company employees are heavily skewed towards Democratic candidates.

Things may not be as easy for the tech sector going forward, however. Conservatives have accused social media companies of stifling their voices.

According to a recent Pew Research study, 53% of conservative Republicans favor increasing government regulation of big tech companies, up from 42% in 2018 (Chart 11).

For their part, Democrats have expressed concerns about the growing monopoly power of tech companies and their perceived insouciant attitude towards consumer privacy.

He has also argued that online platforms should not be granted legal immunity for user-generated content.

On the tax side, Biden has vowed to reverse half of Trump’s corporate tax cuts, while introducing a minimum 15% corporate tax.

The latter could disproportionately affect a number of prominent tech companies that have taken full advantage of the current tax code to minimize their tax liabilities.

Meanwhile, tech companies are increasingly finding themselves in the crossfire between China and the US.

While Joe Biden would not be as quick to impose unilateral tariffs on China as Donald Trump, BCA Research’s geopolitical strategists warn that the rivalry between the two nations will intensify over the coming decade as they reduce their economic interdependency and vie for military advantage in Asia.

Related stories: When Will the Stock Market Tank?